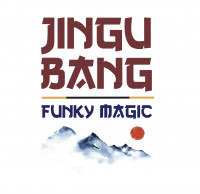 Fringe Jazz presents JINGU BANG at The BRISTOL MUSIC CLUB, 76 St Paul's Road, Clifton. Bristol BS8 1LP  on Wednesday 19th October at 7PM. Tickets £16.
Ruth Hammond - Tenor Sax, Flute, Synth,
Dale Hambridge - Keyboards,
Greig Robinson - Bass,
Lisa Cherian - Congas, Percussion,
Scott Hammond - Drums
Doors Open 7pm
Performance Starts at 7.30pm
During unsettled times, five travellers from distant lands went in search of their destiny. In the imposing mountains soaring high above the bamboo forests of Bristol, they banded together as one unstoppable force, and accepted the calling of the JINGU BANG.
Their free-flowing funk mastery is expressed across the lands through both their own creations and by honouring the works of Herbie Hancock & The Headhunters, Jaco Pastorius, Weather Report and others.
Join them in the earthly realms as they leave no stone unturned in their mission to bring you their irrepressible... funky magic!
JINGU BANG is the brainchild of drummer Scott Hammond, who formed the group about three years ago. Besides being well known on the jazz scene, Scott has for the past decade played drums for legendary rock band Jethro Tull, with whom he has played worldwide.

Ruth Hammond is an amazingly talented multi-instrumentalist and singer, appearing in various bands as either sax player, keyboardist or vocalist. In Jingu Bang she mainly plays tenor sax and flute, but may be adding some synth lines, melodica or bass clarinet, depending on how much stuff they can fit in the car.

Keyboard player Dale Hambridge has worked with pop acts such as Joss Stone and Beverley Knight, and can be heard around Bristol with bands such as We Are Leif and afro-beat behemoth No Go Stop.


Bassist Greig Robinson is originally from Scotland, and has worked with Dennis Rollins’ Badbone,  The Haggis Horns, Corinne Bailey Rae and Lily Allen.


Lisa Cherian completes the band on congas and additional percussion. Lisa must be one of Bristol's busiest musicians, performing with the Dockside Latin Orchestra, Brass Junkies, Baila La Cumbia, World Government and many more.